Cosmos Power is a very efficient and fun glider to fly. Designed as a fully dedicated ppg glider that can also be used, for both free-flight and paramotoring.

Cosmos Power offers remarkable pitch stability and efficiency due to our "efficient full reflex" profile and low-drag line plan. The new airfoil represents the forefront in paramotor glider design as it brings benchmark fuel efficiency, stability and speed, only to be found in modern paramotor wings.

We say "efficient" because of the full reflex traditionally used in ppg wing designs, is not an efficient airfoil by any means. However, we have managed to combine some of the key elements of our high-end free-flying gliders and technology into our full reflex paramotor profile, making it extremely efficient and stable.

The result is in an incredibly efficient airfoil with the same outstanding levels of pitch stability found on full reflex gliders.

Cosmos Power's airfoil not only gives increased levels of safety and stability also increased efficiency at extremely high AoA when flying at speed.
In real-life tests, our paramotor wings have shown unprecedented efficiency levels (fuel consumption) at low and top-end speeds when compared to traditional non-reflex wings and full-reflex wings.

In a nutshell, Cosmos Power is a nimble glider that is easy to inflate and launch in both nil wind and high wind days. Cruising at trim or at speed the pilot will notice increased stability in all configurations. Equipped with trimmers, speed bar and tip steering, it is easy to explore the full potential of this glider. Cosmos Power is also very roll-stable and no oscillations are present. Landings are easy and facilitated due to the glider’s ability to convert its energy retention into a predictable and reassuring flare. 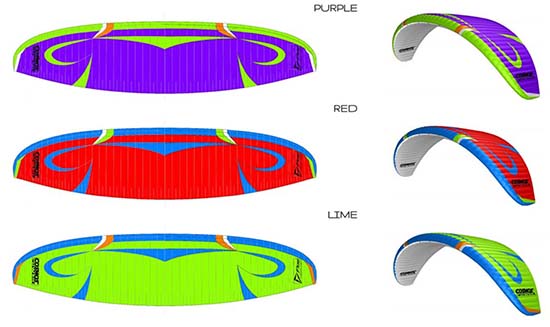